The Benefits of Rocking Chairs 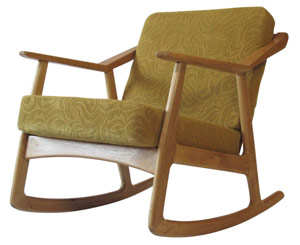 Rocking chairs have not only been the porch accessory for geriatric hillbillys and moonshiners but Pablo Picasso, Mark Twain and John F. Kennedy was reportedly fond of this low impact form of exercise. The gentle back & forth oscillation incorporates use of the calf and thigh muscles and helps the circulation. Historically, one of the first alternative treatments recommended for cardiac rehabilitation used to be the rocking chair. (1)  Oertel recognized the health potential of the rocking chair way back in the 19th century, and recommended rocking as a therapy for beginning cardiac rehabilitation.

Rocking chairs provide movement to those who might not otherwise move at all, so even the extremely aged and demented can benefit.  By design, when one sits in a rocking chair, the slightest motion sets the chair teetering.  The primitive brain is stimulated to propulgate this back & forth motion building momentum to begin rocking.

In a study conducted in the US, platform-type rocking chairs were used by a group of nursing home residents. Despite significant cognitive impairment, most medically stable unrestrained residents accepted the chair and learned to actively rock. During a six-week period, the residents were able to actively rock an average of 101 minutes per day. The study noted improvements in depression/anxiety with recreates in PRN pain medication linked to the amount of rocking. Those who wished to continue rocking after the study was completed also showed improvements in balance as measured by centre of gravity and decreased dependence on analgesic medication.(2)

Hesse(3) noted that in the acute stage following stroke, volitional distal activity is poor. In practice, therapists concentrate on restoring use to the functional limb, while treatment of the involved limb can be frustrating. Training with mechanical and high-tech computerised trainers produced disappointing results. However, for patients in the acute stage of stroke, the repetitive motion using a rocking chair as a stimulus to the shoulder girdle demonstrated significant improvement. Clinical evidence suggests that rocking may decrease blood pressure and claudication symptoms, help to heal bedsores and stasis ulcers, and aid in surgical recovery. Theoretically, repetitive motion could also aid in stroke recovery by promoting motion-induced brain remodelling.

Rocking chairs provide a form of mild to moderate repetitive low intensity exercise which has the capability to enhance quality of life in the elderly. This represents a large spectrum of the population that may otherwise be completely sedentary or bed bound. It is a gentle form of repetitive low intensity exercise with a high level of compliance. Human and primate mothers have discovered the soothing effect that rocking has on infants. It is possible that the psychological benefits of rocking may be shared by other age groups as well. Though more research is required the research suggests that rocking chairs would be a cost effective rehabilitation modality and may help improve quality of life in the elderly.