Jandals Could Be a Flop 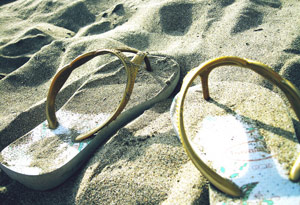 The jandal-wearing season is right around the corner, but a Napier osteopath is warning that wearing the floppy footwear too much in summer can be a “recipe for discomfort”.

David Knight from Knights Osteopathy said the warmer weather often caused a “flurry” of patients with pains in their shins and Achilles.

He said jandals changed the way people walked as their toes curled into a claw shape to keep the footwear in place.  “They make the body [work] in a slightly back-to-front way.  You have to claw your toes and put a lot of pressure on the front of your foot.  It shouldn’t be loaded that way,” he said.

From October and through the summer months, Mr Knight expected to see patients, sometimes up to 20 percent of his weekly total, with muscle irritations and tenderness that were at least partially caused by either the overuse or sudden shift to wearing jandals.  Younger people were less susceptible, but not immune to problems, while symptoms were worse for those who already had tight and shortened calf muscles.

An American study in 2008 showed long-term jandal-wearing could cause pain from the foot up to the hips and into the lower back.  The study found jandals caused people to take shorter steps when compared to sneakers and heels hit the ground with less vertical force.

President of Podiatry New Zealand Bruce Baxter said jandals did not allow good posture, and like with any chronic postural problem, could cause stress over a long period of time.  Problems could be “anything from foot pain, ankle pain and even back pain.  It depends on the individual.  Everyone’s got a different postural profile,” he said.  Mr Knight said it was unlikely jandals would be the sole cause of long-term damage further up the body, but believed they could be a contributing factor.